A few phrases roll quickly off the tongue of State Rep. Keith Faber, a candidate for state auditor.

The Celina resident sees one of the state auditor’s duties as catching those “lying, stealing, and cheating.”

And when talking about how government should run the operative phrases are “better faster cheaper” and “efficient, effective, and transparent.”

“The auditor’s office is not a partisan office,” he said. “You wear the uniform of the umpire. My background shows I don’t show favor. … You elect an auditor to represent Bob and Betty Buckeye and to make sure government works for them, not itself.”

That background includes 17 years in the State Legislature, first in the House, then Senate where he served as president from 2013 to 2016, and now is back in the House representing the 84th district.

He includes ECOT, the private charter school now being sued by the state, in the category of those who have misused state money. He defends how his Republican predecessor Dave Yost, now a candidate for attorney general and the Republican controlled legislature, handled the controversy. Some have charged they let the problem fester too long. 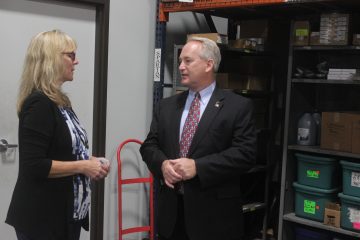 Keith Faber, Republican candidate for state auditor, chats with Doreen Ehlert during a vision to Work Leads to Independence. Ehlert is the agency’s executive director for development.

Faber said he has also supported effort to draw both state legislative and later congressional districts in a non-partisan way. The auditor will sit on the commissions that draw those districts. He backs the goal of keeping political subdivisions together with “a heavy emphasis keeping things compact.”

He said “that should allow people to be represented by people who share their values.”

Having a hand in shaping these new districts, though, is not why he’s seeking the state auditor’s office, he said.

The auditor’s office, he said, is about on one hand providing “service and support to Ohio’s local governments.”

One issue he’s focused on is the cost of audits. Sometimes for small commissions or townships, what’s charged by the state for audits is a disproportionately large share of their budgets, sometimes as much as half.

“I’d like to empower the office to make them less expensive and ask the legislature to help subsidize them.”

Then there’s the compliance side. If someone is caught “lying, stealing, and cheating, there’s a place for them – in jail.”

However, Faber added, he would take a more lenient tact if someone makes a mistake through lack of knowledge or experience and didn’t intend to break law.

“If someone needs trained, we have to make sure we have the resources in place to train them so we don’t have those kinds of problems.”

Faber also wants to increase the number of performance audits the office conducts on state agencies. Yost has done two a year. In that time, Faber said, there’s been savings of $26 for $1 spent on the process, about $250 million.

But given there’s about two dozen state agencies and many other boards and commissions, that rate is not enough to keep up.

“I’ll ask the legislature to ramp up the number of state agencies that get audited,” he said. He’d like every agency audited every four to six years. The savings, he believes, will more than cover the costs.

He believes these audits could provide the incentive for government entities to use the same tools, such as data analytics, and process improvement, that private industry uses to improve their functions.

As a state senator he promoted asking all state universities and colleges to reduce the cost of their degrees by 5 percent. After initial resistance, they did, and the resulting reduction averaged 11 percent.

He also called for performance audits of all institutions of higher education. Ohio State is now undergoing the first one.

Faber said his background as an attorney dealing with forensic accounting and complex financial dealings makes him “uniquely prepared” to take on the duties of auditor.

He said he’d “hit the ground running” on his first day being “Ohio’s chief compliance officer.”

“It’s the place where you make sure those who take state money aren’t lying, stealing, cheating … and they’re following the rules.”

Get The Latest News on Keith's Campaign: